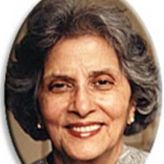 "Attia Hosain was born in Lucknow in 1913. She was educated at La Martiniere and Isabella Thoburn College, Lucknow, blending an English liberal education with that of a traditional Muslim household where she was taught Persian, Urdu and Arabic. She was the first woman to graduate from amongst the feudal “Taluqdari” families into which she was born. Influenced, in the 1930s, by the nationalist movement and the Progressive Writers’ Group in India, she became a journalist, broadcaster and writer of short stories. In 1947 she went to England with her husband and two children. Presenting her own woman’s programme on the BBC Eastern service, amongst others, for many years, she also appeared on television and the West End stage. In addition she lectured on the confluence of Indian and Western culture and wrote Phoenix Fled (1953), a collection of short stories, and Sun- light on a Broken Column (1961), a novel. She now divides her time between London and India."