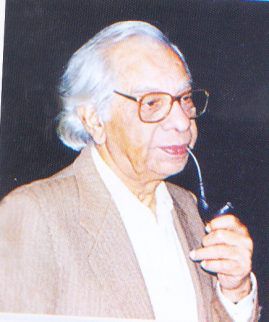 Chaturvedi Badrinath (1933-2010) was born in Mainpuri, Uttar Pradesh. A philosopher, he was a member of the Indian Administrative Service (1957-89), and served in Tamil Nadu for thirty-one years. During 1971-73, he was a Homi Bhabha fellow. As a visiting professor at Heidelberg University, 1971, he gave a series of four seminars on dharma and its application to modern times. Invited by a Swiss foundation, Inter-Cultural Cooperation, he spent a year, 1985-86, in Europe. In 1985, he was a main speaker at the European Forum, Alpbach, Austria, and at a conference of scientists at Cortona, Italy.
From 1989 onwards, Times of India published his articles on dharma and human freedom every fortnight for four years. He was a visiting professor at the Centre for Policy Research, New Delhi, between 1990 and 1992. He was one of the two main speakers at the Inter-Religious Federation for World Peace Conference, 1994, Seoul, South Korea. In 1999, at Weimar, he gave a talk on Goethe and the Indian philosophy of nature; and contributed to an interreligious conference in Jerusalem, with the Dalai Lama. He was one of the two main speakers at the Sasakawa Peace Foundation symposium on 'Civilizational Dialogue', Tokyo, 2002.
Chaturvedi Badrinath's other published books are Dharma, India and the World Order: Twenty-one Essays (1993, Saint Andrew Press, Edinburgh, and Pahl-Rugenstein, Bonn); Introduction to the Kama Sutra (1999, Roli Books, New Delhi; translated into German, French, Italian and Dutch); Finding Jesus in Dharma: Christianity in India (2000, the Indian Society for Promoting Christian Knowledge, ISPCK, Delhi); Swami Vivekananda: The Living Vedanta (2006, Penguin, Delhi); The Mahabharata: An Inquiry into the Human Condition (2006, Orient Longman, Delhi) and The Women of the Mahabharata: The Question of Truth (2006, Orient Longman, Delhi).
He passed away in 2010, a day after winning the Sahitya Akademi Award for his book The Mahabharata. In 2016, Oxford University Press brought out a collection of his essays, Unity of Life.