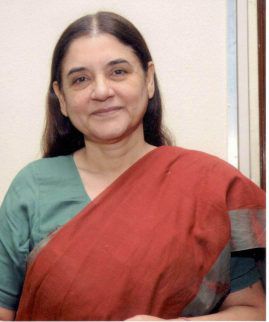 "Maneka Gandhi was born on 26 August 1956 and was educated at Lawrence School, Sanawar. She was a magazine editor and columnist before she embarked on a career in politics. She was elected to Parliament in November 1989 and was later appointed Minister of State for Environment and Forests, a post she held till June 1991. Maneka Gandhi has written three books, Sanjay Gandhi, Brahma’s Hair (a book on the mythology of Indian plants) and Boulababa. Her special interests include Indian mythology, animal welfare (she is the Managing Trustee of the Ruth Cowell Foundation, which runs the Sanjay Gandhi Animal Welfare Centre, India’s largest animal hospital and shelter) and issues related to environmental conservation. She lives in Delhi with her son, Feroze Varun."