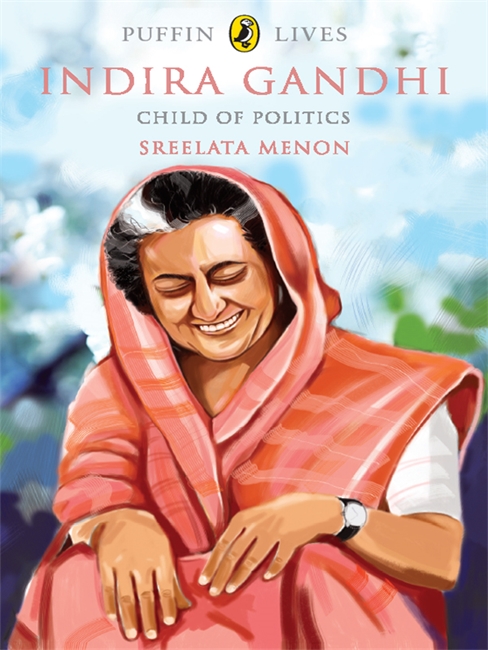 A loving daughter, a caring mother, an affectionate grandmother a confident globetrotter and finally prime minister, Indira slipped into each role with ease.’

The story of India’s first woman prime minister is no ordinary story. It is the story of a girl for whom sacrifice and loss came early. For whom growing up meant seeing her father drift in and out of jail and a mother in and out of hospital. Wearing khadi and organizing her own band of troops. Combating loneliness and giving up the things she loved for a bigger cause.

With the freedom struggle playing out in the background Indira Gandhi’s life was inextricably linked to the politics and destiny of her country. In this compelling biography, Sreelata Menon vividly recreates the life and times of a young girl who goes on to become one of the most powerful and charismatic leaders of the world. Filled with little-known facts about Indira Gandhi’s life this book is a fascinating read that brings to light the different facets of her personality. 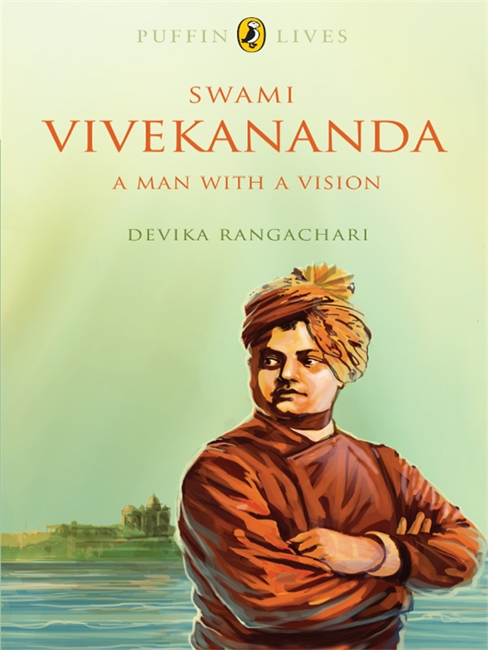 ‘Religion is not in books; not in forms; not in sects; not in nation; religion is in the human heart…It is love alone that can conquer hatred…’- Swami Vivekananda

A genius; a visionary; a writer; a dreamer; a teacher and an inspiration for generations of Indians—this was Swami Vivekananda. Born into a family of lawyers; Narendranath Dutta was an exceptionally intelligent child; a natural leader among his playmates; who impressed his teachers with his scholarship. The spirituality of his mentor Shri Ramakrishna and his own study of philosophy and logic influenced Narendranath to join the monastic order.

Vivekananda was the spokesperson for India at the Parliament of Religions in Chicago where the magic of his words held his audience in thrall. He also instilled among the Indian youth self-confidence and the hope of regeneration.

Devika Rangachari’s account of the life and times of Swami Vivekananda is both inspiring and absorbing. It is the remarkable story of a spiritual leader who worked against overwhelming odds to realize his vision of a free India.

‘Babu Sahib! You must have heard of a phoolsunghi—the flower-pecker—yes? It can never be held captive in a cage. It sucks nectar from a flower and then flies on to the next.’

When Dhelabai, the most popular tawaif of Muzaffarpur, slights Babu Haliwant Sahay, a powerful zamindar from Chappra, he resolves to build a cage that would trap her forever. Thus, the elusive phoolsunghi is trapped within the four walls of the Red Mansion.

Forgetting the past, Dhelabai begins a new life of luxury, comfort, and respect. One day, she hears the soulful voice of Mahendra Misir and loses her heart to him. Mahendra too, feels for her deeply, but the lovers must bear the brunt of circumstances and their own actions which repeatedly pull them apart.

The first ever translation of a Bhojpuri novel into English, Phoolsunghi transports readers to a forgotten world filled with mujras and mehfils, court cases and counterfeit currency, and the crashing waves of the River Saryu.

Terrorists from the Free Kashmir Front hijack a coach on the Shatabdi Express with forty people, just outside Madras. A nephew of the defence minister is among the passengers. Within the first five minutes they have killed a railway guard and caused the authorities to panic. The Special Operations Force, a team of crack commandos from the Army, is called in to deal with the crisis. Heading the operation is Lieutenant Colonel Rajan Menon Raja who is soon convinced that these are not ordinary terrorists. They have the backing of a highly intelligent but crooked head. He dubs the ruthless genius the Krait. Raja leads his men in a brilliant rescue operation in Madras, but he knows this is only the opening gambit in a sinister plan devised by the terrorist mastermind; the Krait will strike again. And he realizes with dismay that the enemy might be one of them . . .

On the bus, in the school play, in the classroom, at the Subway joint, love is everywhere! Ashish and Anjali, the worst of enemies, are cast opposite each other as Romeo and Juliet in the drama competition only to end their legendary enmity forever; Mahira and Prithvi bond over a humble Subway sandwich and discover their common love for soul music and much more; on a train from Brussels to Paris, Shayari meets Matus is it serendipity or coincidence that he is exactly the guy she has been dreaming about all her life?

First dates, crushes, instant chemistry, everlasting bonds and everything that makes the heart grow fonder appear in this collection of love stories by some of India’s bestselling authors, including Jerry Pinto, Rupa Gulab, Ira Trivedi, Milan Vohra and others. These charming stories enthral, entertain and touch a chord . . . somewhere . . .

Lost a pet?
Can’t find something valuable?
Noticed any suspicious activity?
Need to investigate a mystery?
Have a clue to solve? A treasure to find? A secret room to explore?

Call the A to Z Detective Agency to do the work for you!
No mystery too small,
All you have to do is give us a call!

We’ll even let you in on a little secret:
We have a touch of enchanted luck on our side.

And if you’re not happy with our work,
We’ll even offer you your money back!

The A to Z Detective Agency by Ashwin and Zubeida,
Where every mystery comes to rest.

A good job, hard work, IQ, EQ, good communication skills-these are all ingredients for a successful life. The presence of these elements alone, however, does not guarantee success. To convert them into long-term success, you need certain stimuli which precipitate or accelerate your growth. This robustly effective book identifies the various catalysts that you can cultivate and how you can leverage them to propel yourself in your work and life.
Accessible, engaging and easy to follow, and written by someone who has experienced all this in real life and not in theory, Catalyst will arm you with the right tools to succeed at your work place and get the most out of every moment, every day.

How does an item girl tackle sexual harassment at her workplace? Why does a highly paid female software engineer pay dowry? Breast pumps and BlackBerry phones–do they go together? When a woman focuses on her career, does she lose out as a wife and a mother? Is there a female model of achievement distinct from a male one? These and other similar questions are explored in Unbound: Indian Women @ Work through a series of interviews conducted by the author with women from all walks of life and from different parts of the country. Icons such as Kiran Mazumdar Shaw, chairman and managing director of Biocon Ltd, and Meena Ganesh, former CEO of Tesco Hindustan Service Centre, rub shoulders with Rachel the hair designer and Sumathi the call-centre employee who comes from a family of domestic helps. Female engineers discuss insidious gender discrimination and working mothers speak of the difficulties of balancing motherhood and work. The stories in this book are of real women who spoke out candidly about their concerns, their families, their love lives and marriages, their victories and defeats. Together they provide a valuable guide to the brave new world of today’s women professionals.

Choosing a name for your child has never been easier. The Penguin Book of Hindu Names has sold over 50,000 copies since it was published almost a decade ago. The product of several years of research, it is an exhaustive and user-friendly compilation, with information on sources and usage. Including modern names and those which are popular, The Penguin Book of Hindu Names for Girls serves as a practical guide for choosing the perfect name for your son. It is also a precise and invaluable sourcebook for scholars and lay readers alike who would like to know what familiar (and not so familiar) Hindu names actually mean