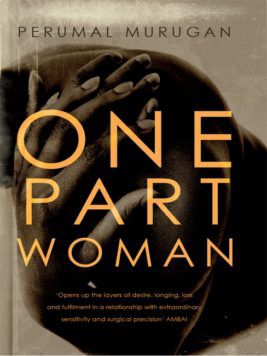 Kali and Ponna's efforts to conceive a child have been in vain. Hounded by the taunts and insinuations of others, all their hopes come to converge on the chariot festival in the temple of Ardhanareeswara, the half-female god. Everything hinges on the one night when rules are relaxed and consensual union between any man and woman is sanctioned. This night could end the couple's suffering and humiliation. But it will also put their marriage to the ultimate test.

Perumal Murugan
Perumal Murugan is the star of contemporary Tamil literature. An award-winning writer, poet and scholar, he has garnered both critical acclaim and commercial success for his vast array of work. Some of his novels have been translated into English to immense acclaim, including Seasons of the Palm, which was shortlisted for the Kiriyama Prize in 2005, and One Part Woman, his best-known work, which was shortlisted for the Crossword Award and won the prestigious ILF Samanvay Bhasha Samman in 2015.
View Profile

Aniruddhan Vasudevan
Aniruddhan Vasudevan is a performer, writer, translator and PhD student in anthropology at the University of Texas, Austin. His much-lauded translation of Perumal Murugan's One Part Woman has become an award-winning bestseller. He has also translated other works by Perumal Murugan to wide acclaim, including Pyre and Songs of a Coward: Poems of Exile.
View Profile
More by the author
View More
Discover your next book
View More