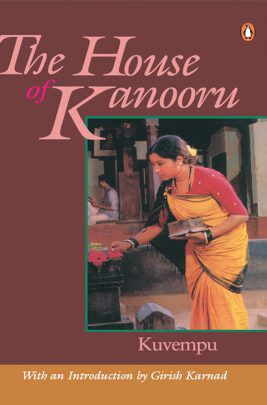 From Kannada's first Jnanpith award winner, a landmark of modern fiction that documents a vanishing world. When Hoovayya and Ramayya return from their studies in the city to their ancestral home, much has changed, throwing the even tenor of village life out of joint. The entry of Subbamma, the young wife of much-married Chandrayya Gowda into the House of Kanooru, sets in motion an irrevocable chain of events which signify the coming of age of a resolutely traditional society. Acutely conscious of the burden of their education amidst the torpor of manorial life, the brothers are forced to witness the descent into cruelty of Chandrayya Gowda, who breaks old familial ties, and demands an impossible fealty. The petty meanness of the Gowda s old age and the idealistic vitality of youth confront each other when Hoovayya and Ramayya both fall in love with Seethe, their childhood playmate, with disastrous consequences for the manor house of Kanooru. The epic conflicts of a decaying feudal order are seen through a multiplicity of characters, and voices that refuse to be silenced. The first stirrings of change in the lives of the Belas, the highland plantation workers and their labouring women, the proud Shudra landowners, the secretive and predatory Agrahara of the Brahmins, are dramatized by a humane eye sensitive to the slightest nuance. The House of Kanooru is ultimately a moving tribute by one of Kannada s greatest writers to the spirit of modernity. Translated from the Kannada by B.C. Ramachandra Sharma and Padma Ramachandra Sharma.

K.V. Puttappa
K.V. Puttappa (Kuvempu) was born in 1904 in Kuppalli, a village in the Malenadu region of Karnataka. After having completed his studies in Mysore, he taught Kannada in the University of Mysore for a number of years and subsequently became its Vice-Chancellor. Though there is no genre in literature which he did not enrich with his unique contribution, it is as a great poet that Karnataka remembers him after his death in 1994. His Sri Ramayana Darshanam, a modern epic, won him both the Sahitya Akademi and Jnanpith Awards and the Government of India conferred on him the Padma Bhushan. He also wrote two epic novels Kanooru Heggadithi (1934) and Malegalalli Madumagalu (1967), which are rightly acclaimed by critics as modern classics. Kanooru Heggadithi has been recently made into a film by Girish Karnad.
View Profile
Discover your next book
View More