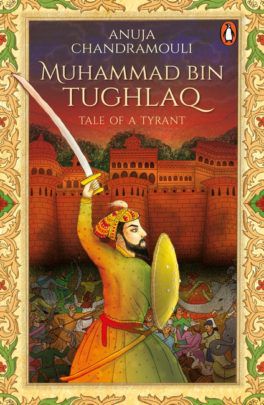 Tale of a Tyrant

When his father dies, Prince Jauna Khan succeeds to the throne of Delhi as Muhammad bin Tughlaq. His reign will prove to be epic and bloody, but unsurpassed in splendour, innovation and defeat.
A formidable strategist and remarkable scholar, the Sultan will go down in history for his brutality as well as his brilliance, unfairly remembered only as a cruel tyrant who might have been raving mad. His high-flown aspirations and grandiose ambitions may have met with crushing failure, but even so, Tughlaq was a great hero of the fourteenth century, albeit a tragic and fatally flawed one.
In this fictional retelling, Anuja Chandramouli, one of India's best mythology writers, reimagines Muhammad bin Tughlaq's life and times in incredible detail to bring to life the man behind the monarch.

Anuja Chandramouli is a bestselling Indian author and new-age Indian classicist. Her highly acclaimed debut novel, Arjuna: Saga of a Pandava Warrior-Prince, was named by Amazon India as one of the top five books in the Indian Writing category for 2013. Yama's Lieutenant, its sequel, Yama's Lieutenant and the Stone Witch and Prithviraj Chauhan: The Emperor of Hearts are her other bestsellers. Her articles, short stories and book reviews appear in various publications like the New Indian Express and The Hindu.
An accomplished orator, she regularly conducts story-telling sessions and workshops on creative writing, empowerment and mythology in schools, colleges and various other platforms.
This happily married mother of two little girls lives in Sivakasi, Tamil Nadu. She is a student of classical dance and yoga.