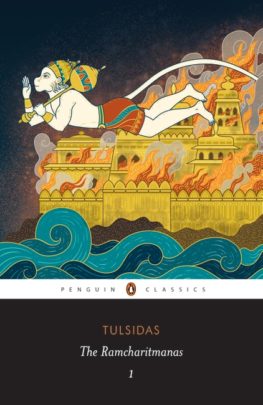 The most popular devotional text recounting the adventures of the Hindu god Ram
The Ramcharitmanas, composed by the poet-saint Tulsidas in the sixteenth century during a dynamic period of religious reform, was instrumental in making the story of Ram-and his divine feats against Ravan, the demon king of Lanka-widely accessible to the common people for the first time. Prior to that, this tale was exclusively the preserve of the priestly class who could read Valmiki's Sanskrit epic, The Ramayana. By reimagining Valmiki's text in the vernacular language, as a poem to be imbibed through recitation rather than reading, Tulsidas kindled a devotional revolution, forever changing the religious and social landscape of northern India.
Rohini Chowdhury's exquisite translation brings Tulsidas's magnum opus vividly to life, and her detailed introduction sheds crucial light on the poet and his work, placing them both in the wider context of Hindi literature.

CHOWDHURY, ROHINI
Rohini Chowdhury is a renowned translator and writer. Her translations include, among others, Banarasidas's Ardhakathanak: A Half Story for Penguin Classics.
View Profile

TULSIDAS (c.1532-1632), the most important of the saint-poets of the medieval bhakti movement in northern India, is also Hindi's greatest poet. Though very little is known about Tulsi's personal life, he left behind a considerable body of work, including his epic, the Ramcharitmanas, a retelling of the story of Ram in Avadhi. Tulsi was an ardent devotee of Ram, and his works have come to occupy almost a canonical status in the Ram tradition in northern India. His other important works include the Gitavali, the Vinay Patrika and the Kavitavali. In addition, the Hanuman Chalisa, a short devotional poem of forty verses in praise of Hanuman, is popularly ascribed to Tulsidas, and is considered by many to be his most important work after the Manas. Tulsidas's works continue to remain popular even today, more than four hundred years after their composition.

TRANSLATOR BIO
ROHINI CHOWDHURY is an established literary translator. Her primary languages are pre-modern (Braj Bhasha and Avadhi) and modern (Khari Boli) Hindi, and English. Her translations include the seventeenth-century Braj Bhasha text Ardhakathanak, widely regarded as the first autobiography in an Indian language, into modern Hindi and into English. She also writes for children, and has more than twenty books and several short stories to her credit. Her published writing, in English and Hindi, covers a wide spectrum of literary genres including novels, short fiction and non-fiction. Her literary interests include mythology, folklore, mathematics and history. She runs a story website at www.longlongtimeago.com.