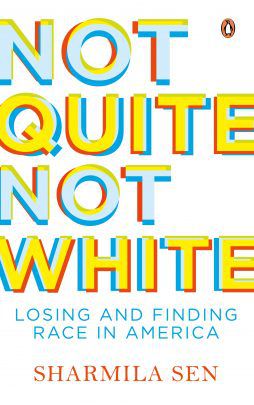 Not Quite Not White

A first-generation American's searing appraisal of race and assimilation in the US
At the age of twelve, Sharmila Sen emigrated from India to the US. The year was 1982, and everywhere she turned, she was asked to self-report her race. Rejecting her new 'not quite' designation-not quite white, not quite black, not quite Asian-she spent much of her life attempting to blend into American whiteness. But after her teen years, watching shows like The Jeffersons, dancing to Duran Duran, and perfecting the art of Jell-O no-bake desserts, she was forced to reckon with the hard questions: Why does whiteness retain its cloak of invisibility while other colours are made hypervisible?

Part memoir, part manifesto, Not Quite Not White is a witty and poignant story of self-discovery.

Sharmila Sen
Sharmila Sen grew up in Calcutta, India, and immigrated to the United States when she was twelve. She was educated in the public schools of Cambridge, Massachusetts, received her A.B. from Harvard and her Ph.D. from Yale in English literature. As an assistant professor at Harvard, she taught courses on literatures from Africa, Asia and the Caribbean for seven years. Currently, she is the executive editor-at-large at Harvard University Press. Sharmila has lived and worked in India, Pakistan and Bangladesh. She has lectured around the world on postcolonial literature and culture, and published essays on racism and immigration. Sharmila resides in Cambridge with her architect husband and their three children.
View Profile
Discover your next book
View More