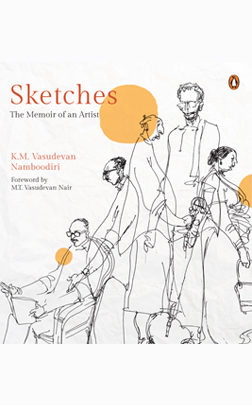 The Memoir of an Artist

The first-ever English translation of the living legend 'Artist' Namboodiri's memoir, Sketches features his eloquent line drawings interspersed with vivid portrayals of the people and places-both ordinary and significant-that he grew up with. Opening a window into the esoteric and forgotten world of twentieth-century rural Kerala, Namboodiri describes how certain family homes and community spaces were the centre of creativity, cultural exchange and mutual regard. With a sprinkling of light humour, he writes about a self-proclaimed doctor who sought out patients, the most famous temple festival that he could not witness, a neighbourhood elephant's encounter with a deaf man, among other amusing vignettes. Through the chronicles of his time at art school, his job as an illustrator for a leading Malayalam magazine, his novel experience of making a film with an actor who didn't want to be paid, Namboodiri offers an exclusive glimpse of the world of art and literature. Among other renowned names, K.C.S. Panicker and Vaikom Muhammad Basheer make an appearance.
Vast in sweep, endlessly engaging and infused with Namboodiri's charming wit, Sketches is a visual and literary delight.

K.M. Vasudevan Namboodiri, better known as Artist Namboodiri, is an eminent illustrator, painter and sculptor from Kerala. Born in Kerala in 1925, he was a disciple of renowned artist K.C.S. Panicker and studied painting at the Madras School of Fine Arts. He is known for his own style of line sketches, called 'Rekhachitrangal', and has drawn for many leading magazines as well as for significant writers of the twentieth century. Namboodiri received the Kerala State Award for the Best Art Direction for Uttarayanam, directed by G. Aravindan, in 1974. He is a recipient of the Raja Ravi Varma Award, 2003, and was the chair of the Kerala Lalitakala Academy.

Gita Krishnankutty is a renowned translator, having won the Crossword Award and the Central Sahitya Akademi Award.