"On 22 November 2007, the city of Kolkata came to a rude screeching halt as a virulent mob of religious fanatics took to the streets of the city. Armed with a fatwa from their ideologues the mob demanded Taslima Nasrin leave the city immediately. While the Kolkata Police stood watching, mere dumb witnesses to such hooliganism, a morally, intellectually and politically bankrupt Left Front Government, tottering under the strain of their thirty-year-old backward looking rule, decided to ban her book and drive her out of Kolkata, a city she has always considered her second home. This inextricable nexus of petty political conspiracies, votebank politics and minority appeasement saw her being hurriedly shifted, first to Jaipur and then to Delhi, only to be confined to an obscure ‘safehouse’ in an undisclosed location and left to face incessant pressure from senior officials and politicians to leave India. Dark, provocative and at times surreal, Exile is a moving and shocking chronicle of Taslima Nasrin’s struggles in India over a period of five months, set against a rising tide of fundamentalism and intolerance that will resonate powerfully with the present socio-political scenario." 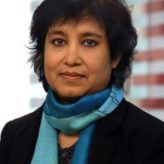 Taslima Nasrin
Taslima Nasrin, an award-winning novelist, celebrated memoirist, physician, secular humanist and human rights activist, is known for her powerful writing on women’s oppression and unflinching criticism of religion, despite forced exile and multiple fatwas calling for her death. Her thirty-seven books have been translated into thirty different languages. Some of them are banned in Bangladesh. The courage of her conviction has resulted in her being banned, blacklisted and banished from Bengal—both from Bangladesh and West Bengal, India. She has been prevented from returning to her country of birth for the last twenty years. Taslima Nasrin’s works have won her the prestigious Ananda Puraskar in 1992 and 2000. She has been recognized with the Sakharov Prize for Freedom of Thought from the European Parliament, the Kurt Tucholsky Award from the Swedish PEN, the Simone de Beauvoir Award and numerous other awards and doctorates.
View Profile
More by the author
Discover your next book
View More