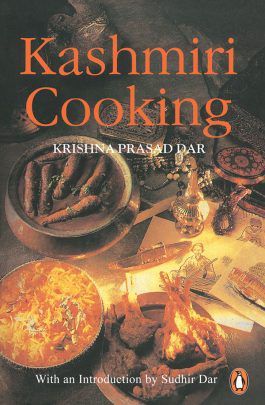 Krishna Prasad Dar's collection of over a hundred Kashmiri recipes became a classic in its time. First published a decade ago. this new revised edition is beautifully illustrated by his son, cartoonist Sudhir Dar, with an informative introduction to Kashmir! food, one of the subcontinent's most elaborate and interesting cuisines.

P Krishna Dar
Krishna Prasad Dar was born in Calcutta in 1893 and educated at St. Xavier’s College. He chose printing as a career when little or no attention was being paid to it in India. Beginning in a small room at Allahabad in the Twenties, in ten years he raised the standard of his printing house, the Allahabad Law Journal Press, to a level of excellence that attracted the best-known authors and publishers of the time. Many of Jawaharlal Nehru’s earliest works, including Letters from a Father to His Daughter and Glimpses of World History, bore the stamp of Krishna Prasad Dar’s printing, as did several writings of Gandhiji. In 1975, he was awarded a Padma Shri for his distinguished contribution to the profession. Two of his books, Adhunik Chhapayi (Modern Printing) and Copy and Proof, were regarded as manuals for decades. Krishna Prasad Dar was many masters rolled into one. Apart from being an eminent printer, he was an accomplished homoeopath, a skilled photographer, a prize-winning gardener and a master craftsman in the art of cooking. Sudhir Dar, one of India’s leading cartoonists, wishes he were ‘half as talented’ as his father.
View Profile
Discover your next book
View More