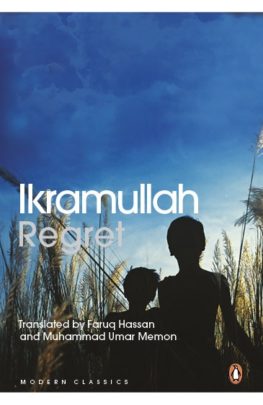 'A restlessness to express the possibilities of fictional dimensions lies at the root of Ikramullah's versatility'---M. Salim-ur-Rahman, Friday Times
Regret brilliantly recreates a childhood shattered by the Partition of India in 1947. Two lifelong friends, Ehsan and Saeed, reminisce about idyllic summer days spent bunking school, swimming in the canal and relishing the thrills of first love-before the division of the subcontinent changed things forever. Out of Sight recounts the story of Ismail, who narrowly escaped the carnage of 1947 in his youth. Now, looking back on his life and despairing of the sudden resurgence of sectarian violence in Pakistan, Ismail resolves to protect those closest to him.

Ikramullah (Author)
IKRAMULLAH ( CHAUDHARY) was born in 1939 in Jandiala, A small village in the Nawan Shehr district of Jhalandhar in India. He finished high school in Amritsar. After Partition his family moved to Multan where he did his BA in 1953 and two years later took a law degree from University Law College at Lahore. He has been writing fiction since 1962 and published several collections of short stories and novellas, one of which, Gurg-e Shab( Nocturnal Wolf), was banned soon after its publication in 1978. More recently, he has published a novel, Saa'e Ki Awaaz ( The Shadow Speaks ).

RAJA FARUQ HASSAN was born in 1939 in Lyallpur (now, Faisalabad, Pakistan) and died in 2011 in Montreal. He held degrees in English studies from the universities of Punjab, Leeds, and New Brunswick, and taught at Dawson College and McGill University, Montreal. He was a published Urdu poet, critic and translator. With Khalid Hassan he co-edited Versions of Truth: Urdu Short Stories from Pakistan (Vikas 1983). His last published work before his death was a book of poems
by the celebrated Turkish poet Nazim Hikmat, which he translated from English.

Mohammad Umar Memon
Mohammad Umar Memon (Author)
MUHAMMAD UMAR MEMON is Professor Emeritus of Urdu literature and Islamic Studies at the University of Wisconsin-Madison. He is a critic, short-story writer, translator and the editor of The Annual of Urdu Studies (1993-2014). He has translated half a dozen anthologies of Urdu fictional writing. His latest published work is The Occult (Penguin), a translation of the critically acclaimed Urdu writer Naiyer Masud's volume of short stories, Seemiya.

M Asaduddin (Author)
M. Asaduddin is an author, critic and translator in several languages. His books include Premchand in World Languages: Translation, Reception and Cinematic Representations; Filming Fiction: Tagore, Premchand and Ray; A Life in Words; The Penguin Book of Classic Urdu Stories; Lifting the Veil: Selected Writings of Ismat Chughtai; For Freedom's Sake: Manto; and (with Mushirul Hasan) Image and Representation: Stories of Muslim Lives in India. He has been a Fulbright Scholar-in-Residence at Rutgers University, New Jersey, USA, and a Charles Wallace Trust Fellow at the British Centre for Literary Translation at the University of East Anglia, Norwich, UK. He is a regular speaker at literary festivals, and his translations have been recognized with the Sahitya Akademi Award, and the Katha and A.K. Ramanujan awards for translation, as well as the Crossword Book Award.