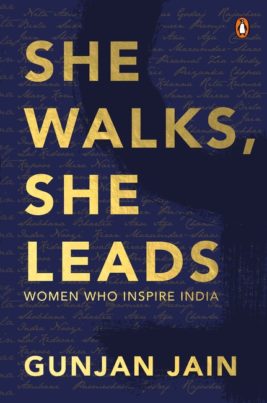 She Walks, She Leads

These are some snippets from She Walks, She Leads, which profiles sixteen iconic women in modern India. These leaders tell their stories, up close and personal. Their relentless ambition to shatter the glass ceiling, their pursuit for excellence and the challenges that came their way-all of this is captured vividly in this exclusive anthology. Each chapter is based on extensive research and has never-seen-before photographs of these luminaries. The chapters are followed by interviews with their companions and confidants who have seen them grow over the years. The women leaders profiled in the book come from different fields like banking, media, cinema, sports, fashion, philanthropy and industry.

Gunjan Jain is a bestselling author, investment banker and lifelong student of mindfulness. She is a graduate from the University of Illinois at Urbana-Champaign (USA) in economics and finance, and has earned her master's in wealth management from the Cass Business School, City, University of London (UK).
Gunjan also holds a diploma in image management from the London Image Institute as well as the Academy of Image Mastery in Singapore. She has received a diploma in international etiquette and protocol from the
Institut Villa Pierrefeu in Switzerland. She also holds a master practitioner's degree in Neuro-Linguistic Programming from the Society of NLP (USA).
She has completed a study abroad session at the London School of Economics and Political Science, studying economics and management as part of her undergraduate studies. In May 2017, Gunjan was felicitated with the WEF 2017 Award for 'Women of the Decade in Community Leadership' for her inspirational journey and work on She Walks, She Leads. She has also been honoured with the Award De Excellencia at the Women Excellence Awards by World Peace and Diplomacy Organization (WPDO) in 2017 and a WCRC Leaders Asia's Pride For Women award for Author of the Year in 2016.
Gunjan is currently working on her first work of fiction, which is a tale of love, loss and redemption. She is also working on a book that aims to help women pursue success without having to compromise on other aspects of their lives, and to establish a deeper connection with their own selves. Gunjan enjoys travelling and has been to thirty-two countries so far; she hopes to strike them all off her list someday. She divides her time between her homes in Mumbai and Kolkata, and enjoys reading when she isn't writing.