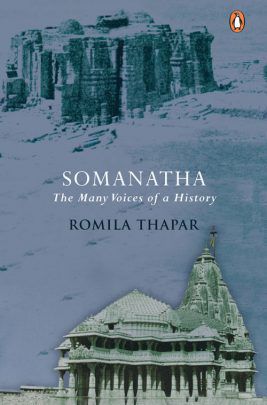 In 1026, Sultan Mahmud of Ghazni raided the Hindu temple of Somanatha (Somnath in textbooks of the colonial period). The story of the raid has reverberated in Indian history, but largely during the raj. It was first depicted as a trauma for the Hindu population not in India, but in the House of Commons. The triumphalist accounts of the event in Turko-Persian chronicles became the main source for most eighteenth-century historians. It suited everyone and helped the British to divide and rule a multi-millioned subcontinent. In her new book, Romila Thapar, the doyenne of Indian historians, reconstructs what took place by studying other sources, including local Sanskrit inscriptions, biographies of kings and merchants of the period, court epics and popular narratives that have survived. The result is astounding and undermines the traditional version of what took place. What makes her findings explosive is the fact that the current Hindu nationalist regime in India constantly utilizes a particular version of history. Romila Thapar
"Romila Thapar was born in India in 1931 and comes from a Punjabi family, spending her early years in various parts of India. She took her first degree from Punjab University and her doctorate from London University. She was appointed to a Readership at Delhi University and subsequently to the Chair in Ancient Indian History at the Jawaharlal Nehru University, New Delhi, where she is now Emeritus Professor in History. Romila Thapar is also an Honorary Fellow of Lady Margaret Hall, Oxford and has been Visiting Professor at Cornell University and the University of Pennsylvania as well as the Collége de France in Paris. In 1983 she was elected General President of the Indian History Congress and in 1999 a Corresponding Fellow of the British Academy. Among her publications are Ashoka and the Decline of the Mauryas, Ancient Indian Social History: Some Interpretations, From Lineage to State, History and Beyond, Sakuntala: Texts, Readings, Histories and Cultural Pasts: Essays on Indian History as well the children’s book Indian Tales."
View Profile
More by the author
Discover your next book
View More