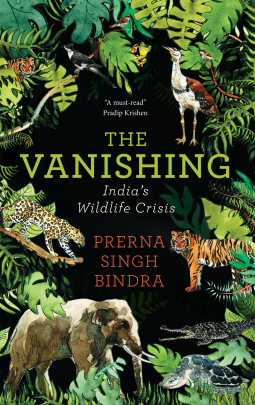 "Can a populous country like India 'afford' to protect wildlife? Is there space for wildlife in a land-scarce, densely populated country, and can wild animals and people coexist, or is the relationship inevitably confrontational? Is conservation and protecting the flora and fauna a hindrance to the growth agenda? Is development inimical to ecological security? The Vanishing explores such burning issues that confront wildlife conservation today."

Prerna Singh Bindra
"Prerna Singh Bindra is India's leading wildlife conservationist and writer. She served as a member, National Board for Wildlife and its core Standing Committee (2010-13), and also on Uttarakhand's State Board for Wildlife. Prerna has written more than 1,500 articles on nature and wildlife and has authored the book The King and I: Travels in Tigerland. Her anthology on contemporary wildlife writings, Voices in the Wilderness, was released in June 2010. Prerna is editor of the journal TigerLink, and is guest faculty for a module for popular writing at the National Centre for Biological Sciences. Prerna has recently set up a trust, Bagh (bagh.org). Prerna's primary focus is protecting wildlife habitats and critically endangered species. She lives in Gurgaon but her heart, she says, resides in the forest."
View Profile
Discover your next book
View More