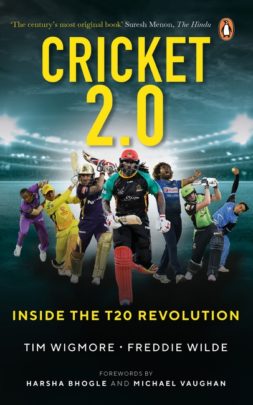 WISDEN BOOK OF THE YEAR

Why is Royal Challengers Bangalore one of the worst-performing teams in the Indian Premier League (IPL), despite having batsman like A.B. de Villiers and Chris Gayle, and being captained by Virat Kohli?
On the other hand, why is Chennai Super Kings (CSK) one of the best-performing teams, despite boasting fewer superstars and an ageing M.S. Dhoni as captain?
The secret could lie in the teams' captaincy styles. But more importantly, it lies in the way T20 teams plan, strategize and build themselves around a core group, which CSK has done.
In Cricket 2.0: Inside the T20 Revolution, Tim Wigmore and Freddie Wilde take us on a whirlwind tour of the cricket format that has taken the world by storm. From its inception, when T20 was accepted by a narrow vote of the Marylebone Cricket Club, to its current global popularity, from its original superstar Chris Gayle to newcomers like Rashid Khan and Sandeep Lamichhane, T20 has become a phenomenon that has resurrected the game of cricket.
From the sunny beaches of Trinidad and Tobago, which gave the world a West Indian team feared by its contemporaries, to the raucous stadiums of the IPL, today one of the world's most valuable sport tournaments, from India's original rejection of T20 to ultimately embracing it, signalling a shift in world cricket, Wigmore and Wilde break down how T20 has changed the game entirely, and why it may be the future of cricket.

Tim Wigmore is a journalist for the Daily Telegraph, and a contributor to ESPNcricinfo, the New York Times and The Economist. He writes about all aspects of sport, especially cricket, sports analytics and the business of sport. Wigmore is a former winner of the Christopher Martin-Jenkins Young Cricket Journalist of the Year award, and among the shortlist for the Cricket Journalist of the Year award in the UK in 2019. His first book, Second XI: Cricket in Its Outposts, was named one of the Guardian's sports books of the year for 2015.

Freddie Wilde works as an analyst and is on the editorial team at the cricket data analytics company CricViz, which provides services to broadcasters, professional teams and players. Freddie is also a freelance journalist, specializing in T20 cricket. He has written for ESPNcricinfo, Cricket Monthly, All Out Cricket, CricBuzz, Wisden India and others.