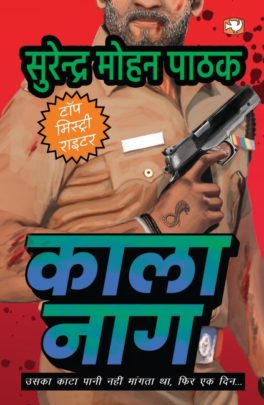 He was a police officer!

The head of a police station, he was after the life of his sub-inspector because of a personal conflict between them. Hot-headed and quarrelsome, he called himself a black serpent (kaala naag), who had the most lethal bite, killing a man in just one strike. And then he struck.

The kind of thriller that will send a shudder down your spine and make your skin crawl as if a snake was uncoiling before your eyes. Unputdownable.

Surendra Mohan Pathak was born on 19 February 1940 in Khemkaran, Punjab. After graduating in Science, he began to work at the Indian Telephone Industries Ltd. By the time he grew up, he had already read many national and international writers and begun translating the novels of Ian Fleming, Mario Puzo and James Hadley Chase, after which he began his own writing.
His most popular novels were Asafal Abhiyaan and Khaali Vaar, which took Pathak to the very zenith of fame. Since then, he has never looked back. His novel, Painsath Lakh ki Dakaiti was also published in English and made news for selling hundreds of millions of copies.