The Children of Destruction

For Alice, life as a teenager is hard enough without turning into a supernatural herald of destruction. And you would think that after causing minor hurricanes with a major sneeze, being visited by a talking fox and ending up on a journey with death around every corner, things can't get much worse.

Between a blind and telekinetic mass murderer, a girl bound to a shadow-demon and a genetically engineered pseudo messiah, a whole generation of weird is ready to come of age. And when it does, the world will change.

If it survives that long. 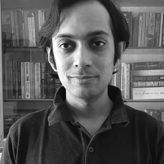 Kuber Kaushik was raised on a steady diet of Asimov, Tolkien and Pratchett, and his love for the written word has only grown stronger over time. In the last decade and a half, he has been a blogger, copywriter, content writer, script writer, screenwriter and novelist.

The first feature film written by him, Shadows Fall, was produced in 2016, and was both screened and has won awards at film festivals in Los Angeles, Panama and Europe. His other works include a number of short films, short stories and even a comic strip chronicling the history of healthcare from 6500 bce onwards and the insanity therein.

Nowadays, his time is spent tinkering with three other novels, exploring and building new worlds with each story. He currently lives in Delhi and can be found on Twitter @thegingap.