Penguin Random House India announces the acquisition of bestselling author Kevin Missal’s The Sindbad Series, an action packed adaption of the fabled tales from The Thousand and One Nights (The Arabian Nights). Published as a trilogy under the Puffin imprint targeting the young adult reader, the first of the fantasy and adventure series will be launched in 2020.

Based on the fearless journey of the legendary sailor, one of the famous heroes from The Thousand and One Nights (The Arabian Nights), the trilogy will see the rise and transformation of Suleiman-Al-Tajir, a small-time thief into the daredevil Sindbad the Sailor who goes on to conquer the seven seas. With powerful villains, faithful side-kicks and terrifying monsters, a sixteen-year-old Sindbad will undertake the journey that will change the trajectory of his life forever.

Arpita Nath, associate commissioning editor, Penguin Random House India, says, ‘Kevin is a tremendously adventurous writer and it is exciting that we get to work with him as he forays into the space of young adult literature. Looking back at Kevin’s earlier writings, we are sure that the Sindbad series will be high on fantasy, adventure and teenage relationships, and successfully bring forth the magic of the legendary sailor.’ 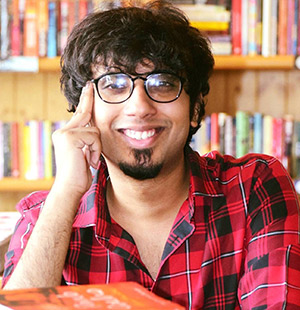 Kevin, a 22-year-old graduate from St. Stephen’s College, is the author of the much-loved Kalki Trilogy. His books, Dharmayoddha Kalki: Avatar of Vishnu (2017) and Satyayoddha Kalki: Eye of Brahma (2018), have gone on to become instant hits.

Sohini Mitra, associate publisher, Penguin Random House India, says, ‘We are delighted to add Kevin Missal to our publishing programme for young adults. Kevin is hugely popular for the rich oeuvre of work he has done and we welcome him into the PRH family with this trilogy. Kevin’s adaptation of Sindbad is a supremely imaginative piece of work, giving a new spin to the age-old adventures.’

Kevin says, ‘Ever since I was a teen, I loved the world mythology and the tales of Sindbad—a fearless sailor who travelled the seven seas to prosper, unafraid of failing and trying again. After my foray in Hindu mythology, I decided I wanted to mix fantasy and world mythology in the story of a young thief called Suleiman who one day be called Sindbad. Teaming up with Penguin was a no brainer for it is home to some of the best YA fantasies out there. And I’m so excited that my first YA venture is coming through them.’