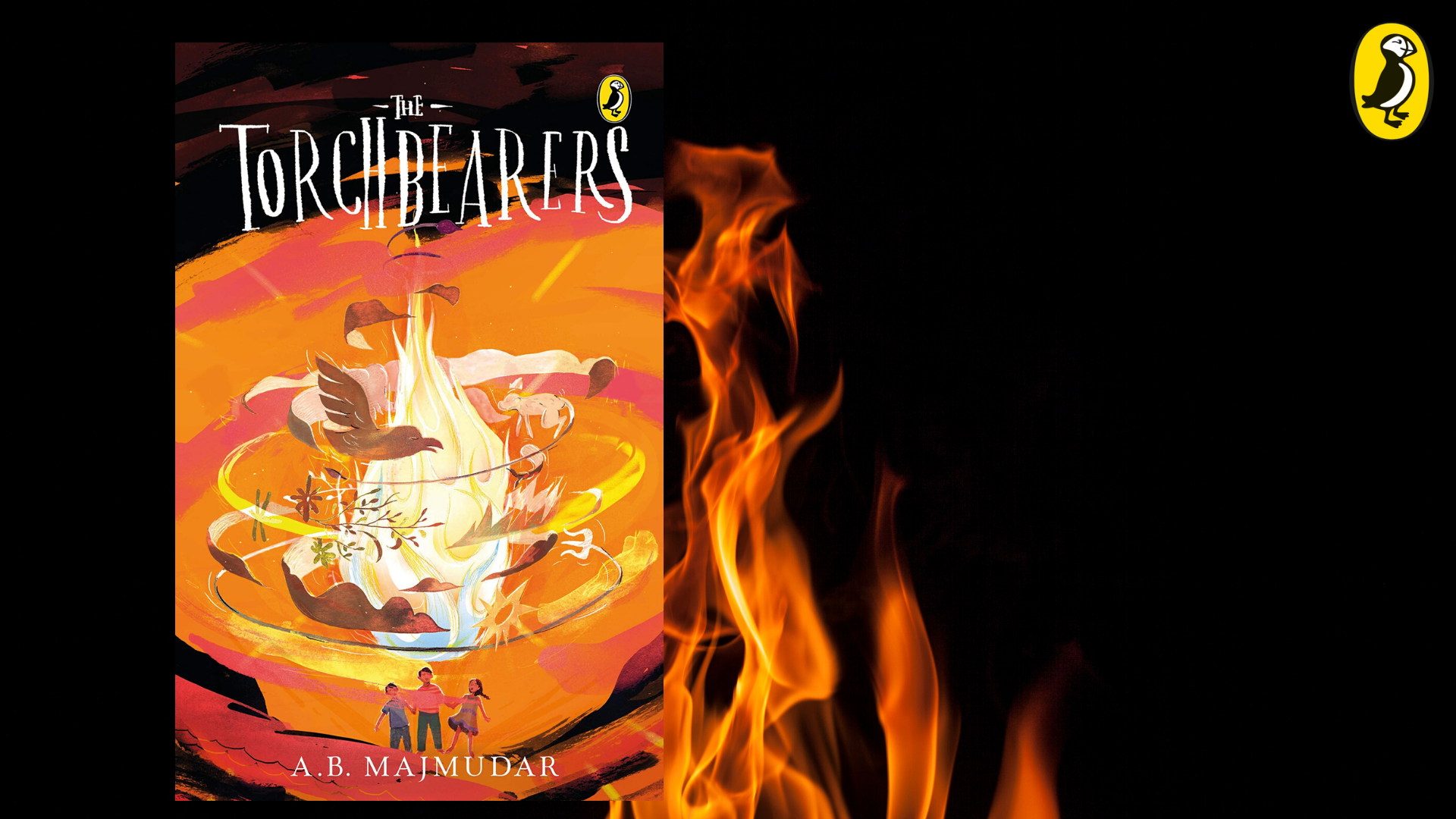 Like any bored eleven-year-old with an imagination, Prem makes fantastic wishes. So when his father drags him to a monsoon-lashed Mumbai, Prem know it’s futile to dream of home. Instead, he wishes for a genie, a dragon and some superpowers. What he certainly doesn’t wish for is a quest to save some gods who are at the brink of extinction.

He finds that the gods’ last hope lies in the hands of those who channel the mysterious power of the Vedas. Caught in a cosmic crossfire, with a talking fish, some inventive monkeys and a few unexpected allies, Prem learns of his true identity-as a Torchbearer.

Here is an excerpt from this lovely book by A.B. Majmudar that talks about how Prem finds himself in Mumbai and all the wishes he makes.

Like any eleven-year old with an imagination, Prem Tripathi made fantastic wishes, especially when he was bored. And he had been bored a lot lately. His father, a professor of ancient Indian mythology, had decided to leave his university job in America to go work at an old research institute in Mumbai. After some sightseeing and a few nights spent at a nice hotel, they had come to a dilapidated old building where Professor Tripathi could bury himself in old Sanskrit manuscripts.

The research institute must have been abandoned for years. Prem and his father had gotten into a fight as soon as they had arrived at the institute. Prem didn’t understand why he had to be there instead of enjoying a typical summer vacation under the blue skies of Midwestern United States: riding bikes, whizzing down waterpark slides, going on roller coasters and playing football with his friends in thebackyard. Instead, his father had dragged him all the way to India, and not the exotic India of The Jungle Book.

‘I can’t believe I’m here, about to be devoured by cockroaches,’ Prem had grumbled to himself. ‘Or geckos.’

Professor Tripathi had smiled, ignoring Prem’s frustration. ‘You know, when you were a baby, you used to coo at the geckos. Kept you entertained for hours.’ Although Prem had been born in India, his father had left with him for America after Prem’s mother had passed away. They hadn’t been back since then.

Now, a few weeks since they landed in Mumbai, Prem had finished reading all the books he had brought with him. So he spent the morning avoiding his dad, who was probably involved in either dusting or research, and soon found himself bored, leaning against the chalky gray wall surrounding the institute, watching the monsoon clouds roll in. Seeing the blue sky suddenly covered in storm clouds made him scowl. ‘Just like my life,’ he mumbled.

Prem glowered up at the sky. The air seemed to hold its breath, and even the stray dogs stopped barking for a moment. Then, with a faint flash of lightning and a distant rumble of thunder, the first raindrop fell. Big, warm drops of water splattered into the dirt, disappearing instantly. Soon the drops darkened the ground, and puddles formed in the dust on either side of the road.

‘So this is the monsoon,’ Prem said to himself as he raced to stand under a large tree. His black hair was slick in minutes despite taking cover, his shirt soaked through. With a shrug that seemed to say, ‘What’s the point?’ Prem stepped out from under the tree. He cupped his hands and let the rainwater fill his hands. He released the water with a satisfying splat onto the soaked ground. He did it again. With every handful of water, he made a wish. Wish, splash. Wish, splash. At first, he wished it would stop being so hot. But then, he figured, why not wish big?

He had just collected yet another handful of water when a tiny fish dropped into his hands. Wish, splash, fish.

It called out to Prem in a tiny voice, ‘Don’t drop me!’

Prem looked closely at his hands, stilled in a cup. He saw a golden fish, smaller than his fingernail, floating in his hand. He peered at the fish. It was shimmering, despite the cloudy skies, like a flame.

Who is this talking fish and what adventures will Prem find himself in after this moment? Get a copy of The Torchbearers to find out!