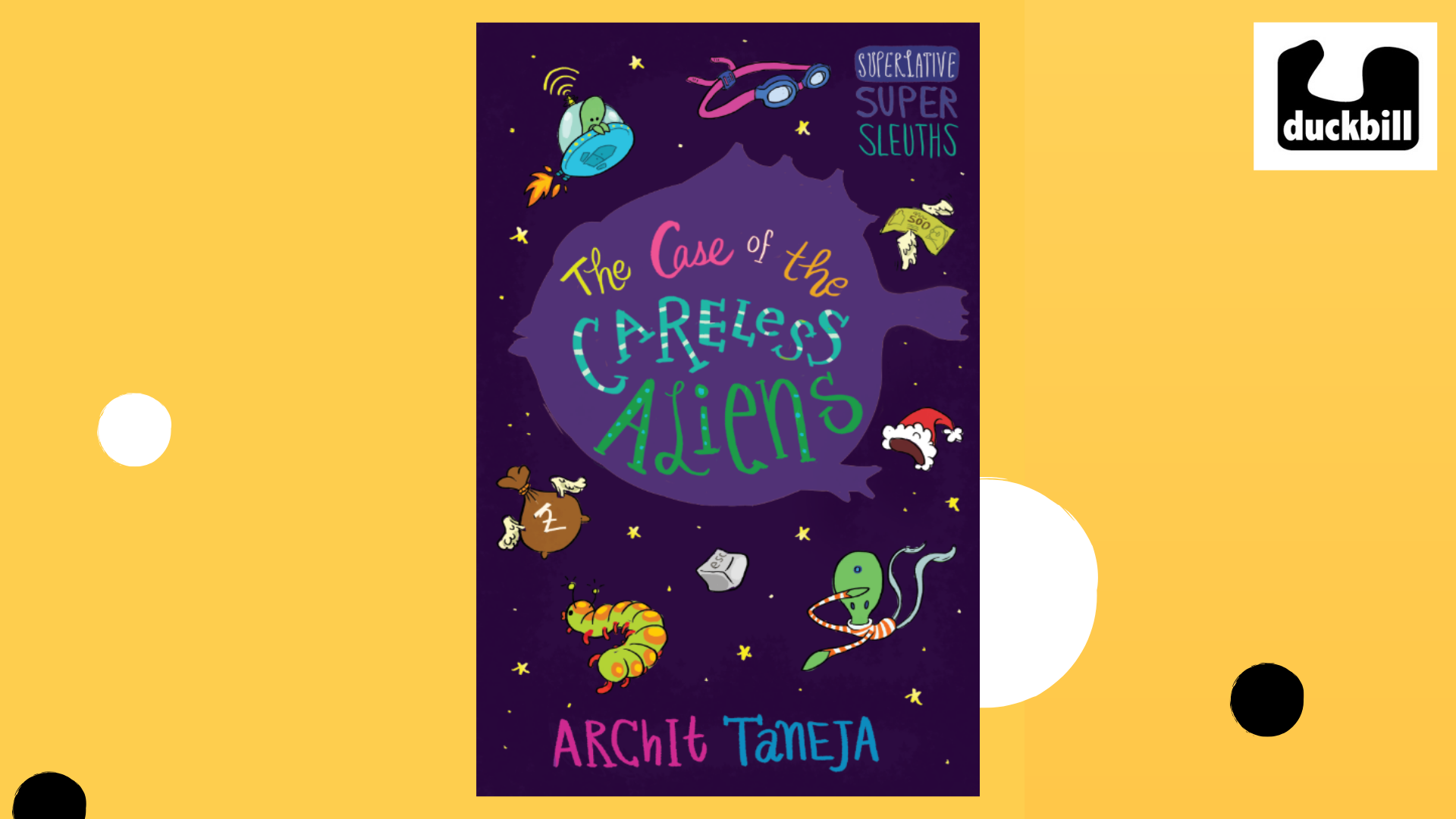 Sinister aliens are on the loose in Archit Taneja’s book, The Case of the Careless Aliens! Money is appearing mysteriously in unexpected places around the city. UFOs have been spotted in the sky. If aliens are trying to take over, they have been very careless indeed!

In this excerpt, we meet the SUPERLATIVE SUPERSLEUTHS, one of whom – unfortunately, at present, is grounded. But why?!

It’s been chilly and windy this weekend. That’s perfect weather to stay home, eat ice cream and popcorn, and laugh at crime shows on TV.

My plans went bust when Aarti called on Saturday afternoon. She said she’d been grounded and needed moral support. She pleaded on the phone for what seemed like a century in plead years.

‘You get grounded all the time! You’ve never whined about it before!’

‘I’ve been grounded for two weeks,’ she muttered in a cold voice.

Getting grounded for that long is unheard of. One would need to commit an unspeakable crime. It was especially hard to believe, since Aarti’s parents were super anti-punishment and all that sort of stuff.

‘What did you do, exactly?’

‘Er … I can’t tell you. It doesn’t matter, anyway,’ Aarti mumbled. She was barely audible now.

‘Are you really grounded? Friends aren’t allowed to visit when you’re grounded, right?’

That made me curious enough to want to go over. She was either making all this up to lure me to visit or she’d actually done something really crazy this time. Perhaps she was too embarrassed to talk about it. In either case, it sounded like fun!

I packed my bag with stuff for the weekend. I picked up a case file I had prepared a few months ago. It contained notes on the peculiarities of Aarti’s room. I slipped in a few empty sheets, just in case there was some sleuthing to do.

Aarti’s dad opened the door; he gave a half- hearted smile and asked me to come in. He returned to the dining table and sat opposite Aarti’s mum. They resumed what sounded like a serious conversation. I am used to getting a warm hug from both of them whenever I visit. The radio was playing old boring music instead of the regular upbeat stuff.

I wondered if something bad had happened. Maybe someone they knew got into an accident or something. But why would Aarti be grounded for that? I really doubt that she nicked the car and ran over someone; she’s never been fond of the idea of driving.

Aarti’s grandparents were over. They were there quite often since they lived in the apartment right across

from Aarti’s. Grandma was watching a documentary on TV. She hates those and shrugs whenever I am anywhere close to the TV remote because she knows I’m into anything that involves learning.

It all seemed very unusual.

Aarti’s mum asked me to make sure that she didn’t have too much fun and that I talk to her about being a good child. Grandma nodded in approval. Of all people, they chose me to put sense in her head. Aarti’s really done for this time. I’m so excited!

‘Your family is acting weird,’ I said.

Aarti sat calmly on her bed. Her room was scattered with newspapers. She separated the pages containing comics and puzzles from each day’s paper, and threw away the rest.

‘Tell me. Why are you grounded?’

Why do you think Aarti is grounded? Get a copy of The Case of the Careless Aliens to find out!