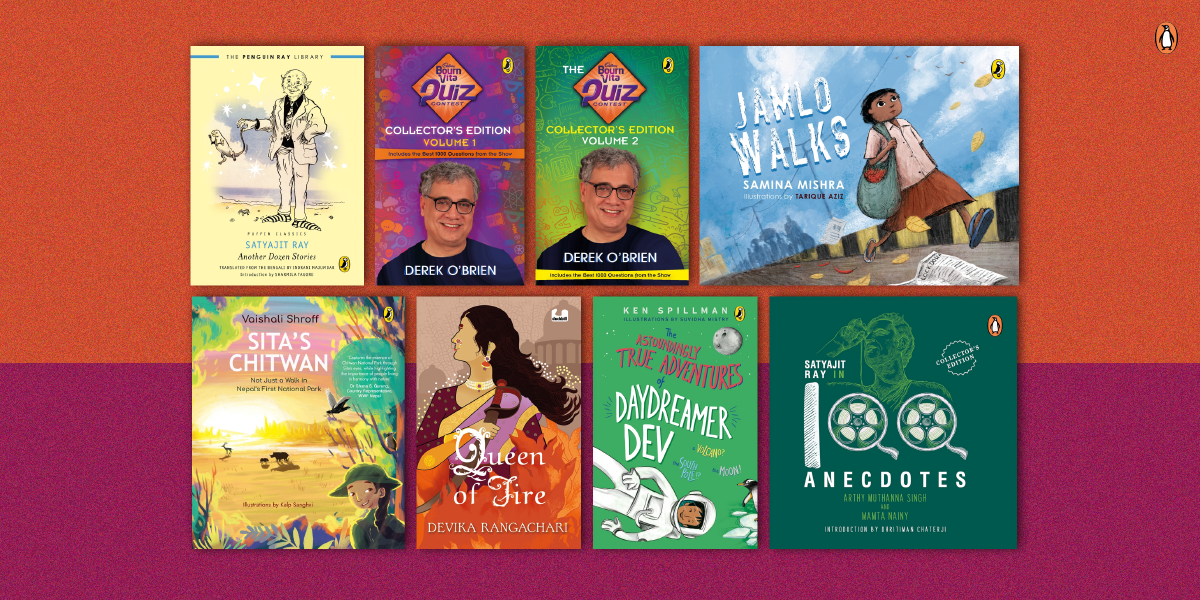 As days get longer and warmer, we find ourselves cooped up in our homes, avoiding the scorching heat and that deadly virus no one should name. But time indoors doesn’t have to feel like a chore necessarily, thanks to our age-old friends—books.

Here’s a list of refreshing reads to keep you engrossed and entertained through the long, sunny days of April.

Lakshmibai, the widowed queen of Jhansi, is determined to protect her son’s right to his father’s throne and safeguard the welfare of her kingdom. Faced with machinations to take over Jhansi, at a time when all of India is rising up against the British, she has to prove her valour and sagacity time and again. But will this be enough to save all that she values?

In this gripping novel, award-winning historical novelist Devika Rangachari brings to vivid life the interior life of this nineteenth-century queen, thrust into a position she does not desire but must assume, and of her son, who is cowed by the challenges he has to face but determined to live up to his mother’s courage.

Tracing his magnificent life with 100 little-known and inspiring incidents as well as unusual trivia, this collectible edition pays homage to the maestro on his 100th birth anniversary.

A master filmmaker, a remarkable auteur, a writer par excellence and an artist of immense reach and range, Satyajit Ray was an indefinable genius. This book is a classic tribute that celebrates his many accomplishments across literature, music, art and more.

Another Dozen Stories brings to you the magical, bizarre, spooky and sometimes astonishing worlds created by Satyajit Ray, featuring an extraordinary bunch of characters!

While ‘The McKenzie Fruit’ trails a humble man trying to leave his mark in history, ‘Worthless’ is a moving story about a seemingly hapless character not quite able to win the confidence of his family. Meet Professor Hijibijbij, the eccentric scientist bent on creating living replicas of peculiar creatures and follow Master Angshuman into a nail-biting and unexpected adventure on the sets of his very first film. This collection includes twelve hair-raising stories that will leave you asking for more!

It is day 7 of the lockdown and everyone says the skies are blue again.
Jamlo walks. She looks straight at the road ahead. It is long.

The world has stood still. The streets lie empty and schools are closed. All work has dried up and people keep whispering the word ‘corona’ all the time. Jamlo walks down a long and hot road, alongside hundreds of other men and women and children whom Tara sees on TV. Jamlo walks as Rahul watches the streets turn quiet.

Jamlo walks and walks in a world that needs to be kind and just and equal. A world where all lives are seen as important.

Sita dreams of being a nature guide like her baba. With a spring in her step and a group of eager tourists, she unravels the secrets of the forest. But when she wanders astray and comes face to face with a mamma rhino, will this eight-year-old be able to listen to the stillness of the jungle?

Forever daydreaming-that’s Dev. Sitting in class or watching the clouds from the roof of Kwality Carpets, he floats off to places all over the world and has wonderful, bizarre adventures.

Mild-mannered schoolboy Dev is no stranger to survival in extreme environments. Classroom trances and home-made flights of fancy take him all over the place-what other kid could have visited Amazon rainforests, summited Mount Everest and crossed the Sahara? Along with the challenges of all this, he also needs to avoid the wrath of teachers and make Amma and Baba proud . . . Not so easy when your brain lives elsewhere!

The award-winning Bournvita Quiz Contest started as a radio programme in 1972, then shifted to television in the 1990s. Since 1994, it has been hosted by Asia’s best-known quizmaster, Derek O’Brien, in his inimitable style, and it holds the record for being the longest-running knowledge game show on Indian television.
This definitive edition comprises a selection of the best Q & As from this iconic children’s show. Featuring 1000 questions, carefully curated from the exhaustive twenty-year-old archives, this book is dotted with heartening anecdotes, fun trivia and thoughtful essays by people who worked on this much-loved show.

Which Nobel laureate wrote articles under the name Gul Makai?
Hilsa is the national fish of which neighbouring country of India?
In which organ of the human body would you find the aqueous humour?

With fun Q&As carefully curated from the exhaustive twenty-year-old archives, this definitive book is a treat for all quiz aficionados who can choose from an array of fifty sections including:

In Sonia Mehta’s Being a Good Friend Is Cool from her new series of books — My Book of Values, the author talks about the cool value of being a good friend.
Nicky and Noni have a new boy in class, but Nicky seems to be doing something wrong. What is it? Let’s find out!

What do Nicky and Noni do next? Do they become friends with Jojo? Grab a copy of Being a Good Friend is Cool to find out!