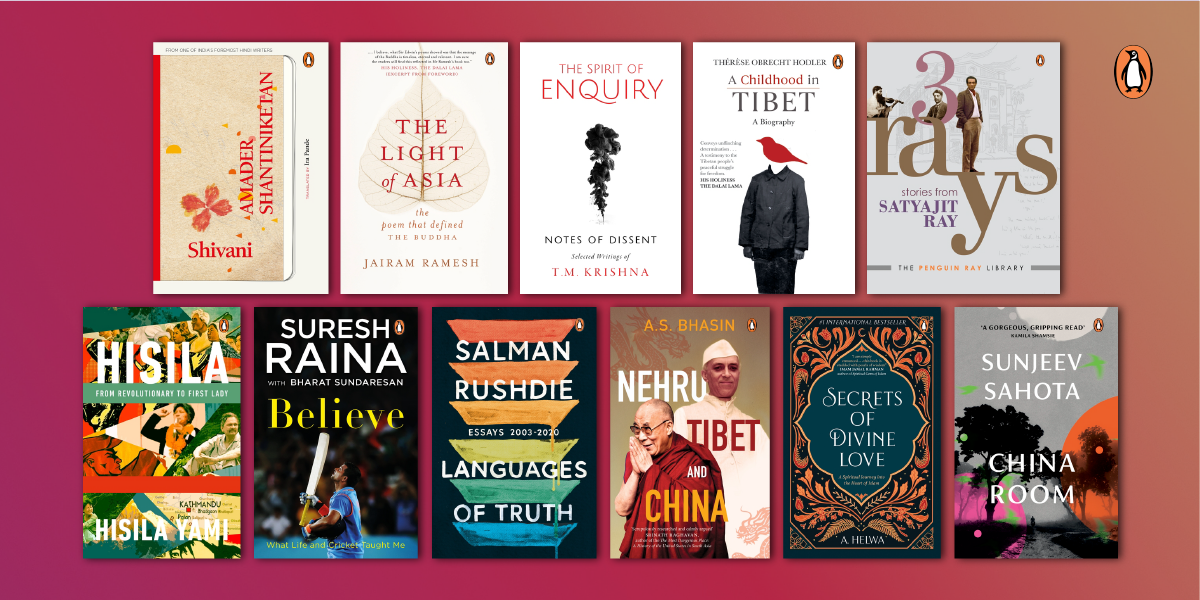 ‘May’ is a word filled with promises and possibilities. It is also a word that conveys blessings and best wishes. These are emotions the entire human race has been expressing and feeling toward one another constantly through this difficult period that has spanned over a year. A homograph to this word that is so laden with potential and compassion, is the month we have now stepped into. May ‘may’ have a lot to offer you in terms of comfort and relief, but what we certainly have to offer you this month is an array of our latest releases. May they bring a little light, love, laughter, knowledge and hope into your lives.

In this fascinating book, Hisila Yami traces her journey from being a young Nepali student of architecture in Delhi in the early eighties to becoming a Maoist revolutionary engaging in guerrilla warfare in Nepal. Yami was one of two women leaders who were a part of the politburo of the Communist Party of Nepal, which led the revolutionary People’s War.
This lucidly written political memoir may talk about gaining political awareness, joining protests, being imprisoned, participating in the People’s War, and later her experiences as the first lady and a minister. But, at the same time, it’s also a narrative that offers glimpses of her personal life. She candidly writes about falling in love and marrying a fellow politician, Baburam Bhattarai, who went on to become the prime minister of Nepal. From how she balanced her political life with motherhood to what it meant to be a woman in the communist party that launched a civil war, Yami narrates an unforgettable account of a remarkable life.

Satyajit Ray (1921-1992), through his life, philosophy and works offered a unique aesthetic sensibility, which took our cinema, art and literature to a new height. Ray, an ace designer, music composer, illustrator and a gifted writer, gave us the iconic Feluda and Professor Shonku, loved and revered by millions of readers.

Celebrating his centenary birth anniversary, Three Rays: Stories from Satyajit Ray, the first book in ‘The Penguin Ray Library’ series, opens a window to his brilliance. With more than forty previously unpublished stories, autobiographical writings and illustrations by Ray, this volume opens a window to the Master’s creative genius.

Secrets of Divine Love draws upon the spiritual secrets of the Qu’ran, mystical poetry and stories from the world’s greatest prophets and spiritual masters to help you reignite your faith, overcome your doubts and deepen your connection with God. Practical exercises and guided meditations will help you develop the tools and awareness to overcome the inner critic that prevents you from experiencing God’s all-encompassing love.
Through the principles and practices of Islam, you will learn how to unlock your spiritual potential and your divine purpose. This insightful book uses a rational yet heart-based approach towards the Qu’ran that enlightens and inspires towards a deeper intimacy with God.

Believe, Sachin Tendulkar told him – and he took it to heart, getting the word etched on his arm as a tattoo.

In this book, Suresh Raina takes us through the challenges he faced as a young cricketer. He was bullied as a child, but he overcame every adversity life threw at him and never gave up. This is the story of the lessons he learnt and the friendships he built.

Peppered with invaluable insights – about the game and about life – that Raina acquired from senior colleagues, this book will make you believe in the power of hard work, love, luck, hope and camaraderie. It is a journey through the highs and lows in the career of a man who saw his world fall apart and yet became one of the most influential white-ball cricketers India has ever seen.

Salman Rushdie is celebrated as a storyteller of the highest order, illuminating truths about our society and culture through his gorgeous prose. In his latest collection of nonfiction, he brings together insightful essays and speeches that focus on his relationship with the written word and reinforce him as one of the most original thinkers of our time.

Gathering pieces written from 2003 to 2020, Languages of Truth chronicles Rushdie’s intellectual engagement with a period of momentous cultural shifts. He delves into the nature of storytelling as a human need in what emerges as a love letter to literature. Rushdie explores what the work of authors from Shakespeare and Cervantes to Samuel Beckett, Eudora Welty, and Toni Morrison mean to him. He delves deep into the nature of ‘truth’, revels in the vibrant malleability of language, the creative lines that join art and life, and looks anew at migration, multiculturalism and censorship.

Enlivened by Rushdie’s signature wit, Languages of Truth offers his piercingly analytical views on the evolution of literature and culture as he takes us on a tour of his own exuberant imagination.

On 1 October 1949, the People’s Republic of China came into being. Power moved from the hands of the nationalist Kuomintang government to the Communist Party of China headed by Mao Tse Tung. All of a sudden, it was not only a new China that India had to deal with but also a Tibet which was under increasing pressure.

Clearly, newly independent India, with Prime Minister Jawaharlal Nehru at its helm, was navigating choppy waters. Its relations with China deteriorated, eventually leading to the Indo-China war in 1962. Today, more than six decades after the war, we are still face border disputes with China that seem to routinely grab headlines. It leads one to question what exactly went on during the emergence of a new China and why have we repeatedly failed to arrive at a solution?

Based on meticulous archival research, this book analyses the events from 1949 to the Indo-China war in 1962 and its aftermath to uncover answers to these burning questions.

A Childhood in Tibet

Tendöl Namling turned 60 in 2019. She was born at the time the Dalai Lama fled from Lhasa and the uprising of his people by the Chinese People’s Army was brutally suppressed. She lived 22 years under Chinese rule. As daughter of a high government official, she underwent the ordeal of ‘re-education’ with full force. All she had from these years are painful memories and crumpled photographs of her with friends and cousins in Lhasa, smiling as if nothing happened. When Tendöl turned 10 her brother was arrested and her mother sentenced to ten years in prison. Tendöl was sent to work in road construction for several years, following which she was allowed to start an apprenticeship as motor mechanic. Thanks to the efforts of her family in exile, Tendöl was able to leave Tibet in 1982. After twenty years of hardship she landed in prosperous Switzerland. She struggled to start her life all over again, but never gave up.

In Tendöl’s words, ‘this little book is dedicated to all the Tibetans who continue to rebel against the Chinese occupation’.

The Light of Asia

‘The Light of Asia’ is an epic poem by Sir Edwin Arnold that was first published in 1879. It quickly became a huge sensation and has continued to resonate powerfully across the world over the last century and a half. Weaving together literary, cultural, political and social history, Jairam Ramesh uncovers and narrates the fascinating story of this deeply consequential and compelling poem that has shaped our thinking of an ancient sage and his teachings. He brings into this unusual narrative the life of the multi-faceted poet himself who, among other things, was steeped in Sanskrit literature.

Sir Edwin Arnold’s English rendering of the Bhagavad Gita was one of Mahatma Gandhi’s favourites. He was also in many ways the man who may have shaped Bodh Gaya as we know it today.

A multigenerational novel of love, oppression, trauma and the pursuit of freedom, inspired in part by the author’s own family history, China Room twines together the stories of a woman and a man separated by more than half a century but united by blood.

Mehar, a young bride in the rural Punjab of 1929, is trying to discover the identity of her new husband. She and her sisters-in-law, married to three brothers in a single ceremony, spend their days working in the family’s ‘china room’, separated from the men. When Mehar develops a theory as to which of them is hers, a passion is ignited that puts more than one life at risk.

Spiralling around Mehar’s story is that of a young man who, in 1999, travels from England to a deserted farm, its ‘china room’ locked and barred. In enforced flight from the traumas of his adolescence-his experiences of addiction, racism and estrangement from the culture of his birth-he spends a summer in painful contemplation and recovery, before finally finding the strength to return home.

Padma Shri and late Hindi author Shivani’s memoirs of studying at the experimental school set up by Rabindranath Tagore, the Ashram, this charming memoir is a loving homage to a grand institution and its legendary gurus. Written from the perspective of a child, it retains the freshness and innocence of an age when experimental education was not merely a trendy movement. Shivani’s vivid pictures of the Ashram and portraits of her teachers and fellow students remain as alive as they seemed when she first wrote this memoir nearly fifty years ago.

Along with the moving tributes she wrote when some of her beloved contemporaries passed away, this slim memoir is a sort of diptych that captures the spirit of the Ashram and the liveliness of its inmates, many of whom went on to become iconic. Shivani’s recall of her time there takes the reader into an enchanted garden that remains as inspirational to her as it was when she went there a lifetime ago.

As a vocalist in the Karnatik tradition, T.M. Krishna eludes standard analyses. Uncommon in his rendition of music and his interpretation of it, Krishna is at once strong and subtle, manifestly traditional and stunningly innovative. His work is spread across the whole spectrum of music and culture, politics and the social sphere; he is at once philosophical, aesthetic and sociopolitical. He asks important questions about how art is made, performed and disseminated. Unabashedly given to rethinking classical paradigms, he addresses crucial issues of caste, class and gender with nuance and openness.

T.M. Krishna’s key writings have been put together for the first time in this extraordinary collection. The Spirit of Enquiry: Dissent as an Art Form draws from his rich body of work, thematically divided into five key sections: art and artistes; the nation state; the theatre of secularism; savage inequalities; and in memoriam. This collection reflects the critical and cultural engagement of one of our finest thinkers, public intellectuals and practitioners of art.