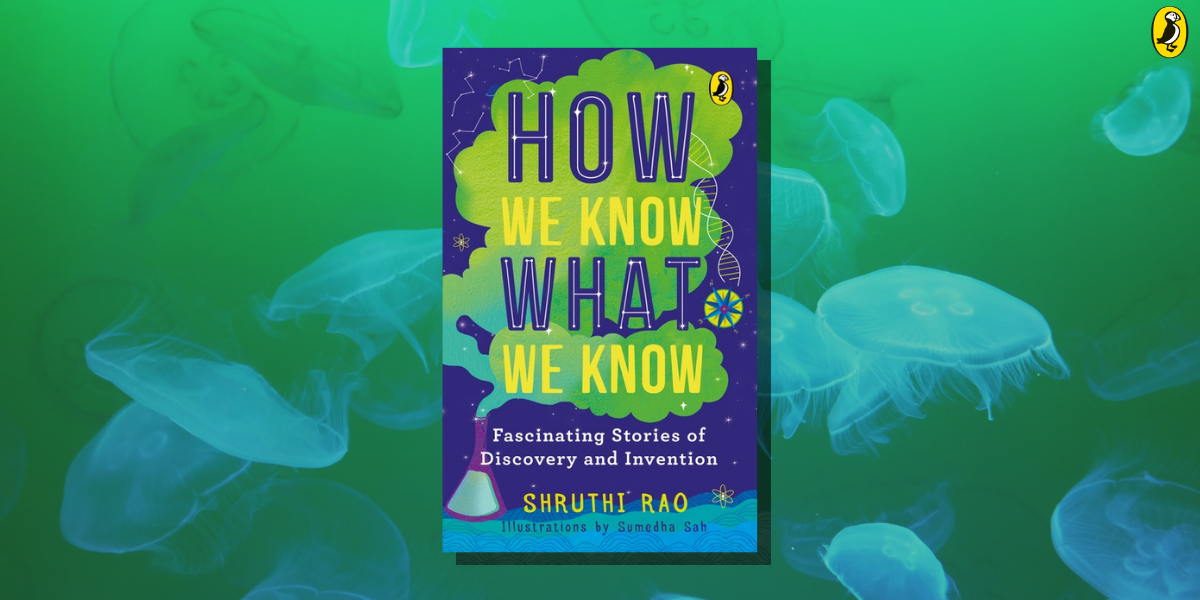 It all started with a big cosmic blast. Or did it? Refresh your facts with this excerpt from Shruthi Rao’s How We Know What We Know  and immerse yourself in a world of fun facts about the world, its origins and all the awe-inspiring details of how everything works.

What is the Big Bang? The sound you hear when you burst a big balloon?

Umm, no. The Big Bang Theory is an attempt to explain what happened at the beginning of our universe.

Wait. Our universe had a beginning? Didn’t it always exist?

That’s what scientists thought too, till a few decades ago. But research and studies suggest that there was indeed a beginning. A point. Before that point, there was nothing. And after that point, the universe came into existence.

We don’t know that. Yet.
But how do we know that this is what happened?
The story began about a 100 years ago, with Georges Lemaître of Belgium. Though he was an officer of the church, he was fascinated by physics and he studied Albert Einstein’s theories of space and time and gravitation. He concluded that if Einstein’s theories were right, it meant that the galaxies in the universe are moving away from each other. Lemaître said this proved that the universe is not just static and unmoving, as everybody previously thought. It was expanding.

It was a theory, and though Lemaître had come up with it on the basis of an established theory, scientists needed other proof before they could accept it. But Lemaître didn’t have any data to support this idea.

Meanwhile, American astronomer Henrietta Leavitt came up with a way to calculate how far away stars are from Earth. Using her work, astronomer Edwin Hubble looked through his telescope and calculated the distances of various stars from Earth. He concluded that things in the universe were moving away from Earth. Not just that, things that were farther away from Earth were moving away faster than things close to Earth. This could only mean one thing. The universe is indeed expanding. Georges Lemaître was right.

Okay. The universe is expanding. But how does that prove there was a Big Bang?

If the universe is expanding, it must have expanded from some point. Think of the expanding universe as a movie. The galaxies are moving outwards, away from each other. Now run that movie backwards. You can imagine it as the galaxies rushing towards each other. So then, all the galaxies must meet at some point. At this point, all the matter of the universe must have been contained in a very small space, that is, the singularity.

The moment at which this singularity started expanding is the Big Bang.

But where was the proof?

Decades later, in 1965, two scientists, Arno Allan Penzias and Robert Woodrow Wilson, were trying to measure radio signals in the empty space between galaxies. They used a giant horn-shaped antenna, called the Holmdel Horn Antenna, in their observatory at Bell Labs in New Jersey, USA. But as they tried to take measurements, an annoying noise kept interfering, like static on a radio.

Where was this noise coming from?

They pointed the antenna towards New York City. No, it wasn’t city noise.

They took measurements of the noise all through the year. No, it didn’t change with the seasons.

Could the noise be from a nuclear test that had taken place a while ago? It couldn’t be. If it was, the noise should have decreased year by year.

Then what was it?

Perhaps it was just the pigeons roosting in the antenna? They chased away the pigeons, and scooped up and cleaned the droppings. But the noise still remained.

Then they learnt about the scientist Robert Dicke, a professor at Princeton University. Dicke had been thinking about the Big Bang. His opinion was that if the Big Bang was true, there should be some kind of matter remaining from the explosion. And most probably, he said, this would be a kind of low-level background radiation throughout the universe.

Dicke wanted to try and find it. But it turned out that it was exactly what Penzias and Wilson had already found! The hum they had encountered was this very radiation resulting from the Big Bang!

Penzias and Wilson got the Nobel Prize for this discovery, because it proved that the Big Bang Theory was true.

Researchers all over the world are still taking better measurements of this noise, and are finding more things to think about.

Exciting trivia awaits you in How We Know What We Know.